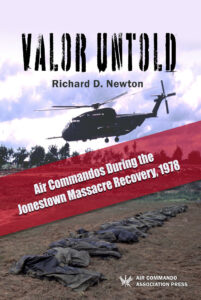 FOR THE FIRST TIME EVER: The untold story of Air Commandos responding to the Jonestown Massacre

It has been 42 years since the tragic November 1978 mass suicide/murder of American citizens at the Peoples Temple Agricultural Settlement in Jonestown, Guyana. In the intervening four decades, so much has happened to US special operations forces and the US Air Force, brought about in large part by world events that demonstrated the unquestionable need for fully resourced, trained, and ready joint special operations forces. This monograph tells the heretofore untold story of what the Airmen who would, a few years later, form the nucleus of Air Force Special Operations Command (AFSOC), did to help recover the victims’ bodies – a special air operation that pushed the limits of what their training and previous combat experiences had prepared them for.
The Airmen and many of their colleagues who were part of the Jonestown operation went on to serve in the initial Special Tactics Teams and as initial cadre of AFSOC’s MH-53 Pave Low and MC-130 Combat Shadow squadrons. At Jonestown they showed the skill, flexibility, and determination so characteristic of modern Air Commandos.  It is a shame that their story has not been previously told in official USAF accounts of the Jonestown operation.  This monograph seeks to right that oversight and finally tell their story.