It is with heavy hearts, we say a final farewell to ACA Life Member #51 Colonel Joe Kittinger. Col Joe as he was known, was an original Air Commando, set several world records in aviation, served in Vietnam, was a prisoner of war, was inducted into the Air Commando Hall of Fame in 1969, and was a close friend of the founders of the Air Commando Association including Brig Gen Harry “Heinie” Aderholt.

Joe Kittinger received numerous awards and recognitions, such as: the Smithsonian Air & Space Museum’s Life Time Achievement in Aviation Award. The Life Time in Aviation Accomplishments Award from the National Bi-Plane Association, the Victor A. Prather Award from the American Astronautical Society, and the Living Legends of Aviation award.

We would like to share a message from the National Aviation Hall of Fame on Col Joe’s flying accomplishments.

“For his daring courageousness in going where none had gone before to pave the way for the NASA astronaut program, Joseph W. Kittinger is enshrined with highest honors into the National Aviation Hall of Fame.”  – at his presentation for induction in 1997

It is with much sadness and admiration that the National Aviation Hall of Fame (NAHF) reflects on the passing of 1997 Enshrinee Joe Kittinger.

Joe Kittinger, aka Col. Joe, will be missed by many, including fellow Enshrinees, members, and the entire National Aviation Hall of Fame.

“With unmatched dedication, Colonel Joe Kittinger, USAF, leaves a legacy of public service,” said NAHF President and CEO Amy Spowart. “As a USAF Test Pilot, Col. Joe skillfully excelled, and as an extraordinary balloonist with Project Man High and then Project Excelsior, he achieved what many saw as impossible. That he continued these successes with three tours of Vietnam is beyond comprehension and combines for what makes him an American worthy of induction into the NAHF.”

Having been ignited by the aviation bug at age two through an introduction with a Ford Trimotor at his local Orlando airport, Kittinger truly began his aviation career in 1950 in the Aviation Cadet Program. Proving himself a talented pilot, Kittinger was eventually assigned to Holloman Air Force Base, where he flew experimental jet fighters and participated in aerospace medical research. This combination would impact Joe Kittigner’s unique aviation experience and legacy. 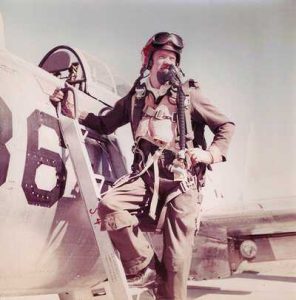 Following the success of Man High One, Kittinger moved to Project Excelsior to test the human ability to survive extremely high altitude bailouts. In 1959, Kittinger jumped from Excelsior I from an altitude of 76,000 feet. Despite a mishap that caused him to lose consciousness, Col. Kittinger achieved his mission and continued to test the limits.

Perhaps his greatest feat came in 1960 in Excelsior III. From an altitude of 102,800 feet, Joe Kittinger set the World Record for the highest balloon ascent. During the ascent, the glove on his pressure suit did not function properly, and he had to decide whether to risk lifelong injury or abort the mission. Kittinger continued and stepped out of the gondola setting another World Record for the longest parachute freefall, four minutes and thirty -six seconds before his parachute opened at 12,000 feet.

“Col. Kittinger reached a speed over 600 miles per hour during that jump,” said Hughes. “He fell through temperatures as low as -94 F. While his hand swelled to twice its normal size during the fall, Col. Kittinger suffered no permanent damage. He demonstrated enormous courage in the pursuit of advancing aeromedical research.”

The results of Joe Kittinger’s courageousness include the new knowledge that it is possible to put a human into space and that fliers can freefall into the atmosphere from higher than first-believed altitudes. It also gave Project Gemini, NASA’s second human spaceflight program, ejection seats and tested the prototypes of the suits worn by X-15 pilots.

Unsurprisingly, Joe Kittinger was not done. Col. Kittinger went on to serve three tours in Vietnam. As the Commander of the 555th “Triple Nickel” Tactical Fighter Squadron, Kittinger flew F-4s. In 1972, he was shot down over North Vietnam and spent 11 months as a prisoner of war in Hanoi. Following his release in 1973, Kittinger was named Vice Wing Commander of an F-4 fighter wing in England. He retired from the USAF in 1978.

And still, Col. Joe was not done. While serving as the VP of Flight Operations for Rosie O’Grady’s Flying Circus in his home city of Orlando, Kittinger set another record for the longest distance flown in a helium balloon; 2000 miles from Las Vegas, NV to Franklinville, NY. In 1984, Kittinger became the first to fly solo across the Atlantic in a helium balloon, 3,543 miles in a 3,000 cubic meter balloon.

“When people ask what makes a person worthy of induction into the NAHF, I often share moments like Col. Joe’s freefall. How can one person put mission before self so eagerly in the name of progress?” said Spowart. “When we talk about standing on the shoulders of giants, the entire aerospace universe should know that they are on Joe Kittinger’s iconic shoulders. The impact he made on the world of aviation is unfathomable. He is a legend in every way, and he will never be forgotten while the NAHF exists.”

In Memory of MSgt Ray Bourque

In Memory of MSgt Ray Bourque

Now ACA members who are current on their dues and have an email on file with us can update their membership profile, view the members only photo gallery, search the member directory, and read the air commando adventures

Partner of the Month

For more than 100 years, Boeing and its customers have created the future of aerospace and defense – from the earliest days of aviation to the highly sophisticated and integrated systems of today. This trusted partnership continues as defense customers once again look to Boeing to help them solve their toughest challenges. Visit our website!

Consider donating to the Air Commando Association to support our war fighters. Every donation counts!